After the successful project at Dr. Lutz, we had nothing to do. We decided to move on and drag the others with us. We caravanned down highway 62 and turned off near the aquaduct. We were headed to the section of state land that SCBS has leased from 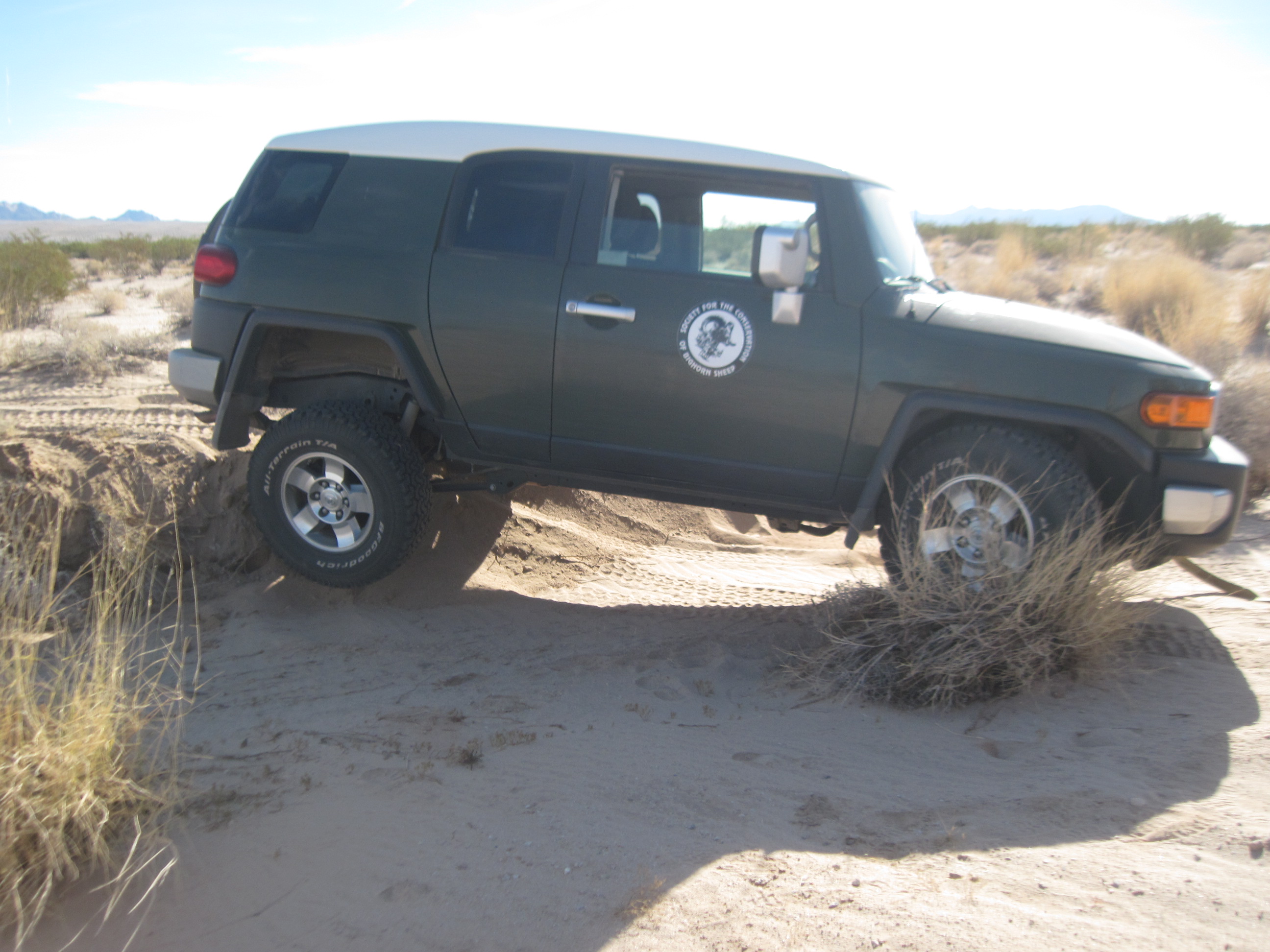 the state lands commission. This section was originally leased by DFG back in the 1970’s but that did not renew the lease so SCBS picked it up a couple years ago. We had to fourwheel across some rather sandy washes and several had been recently rearranged by the rain storms. A little bit of scouting, a little bit of rock moving and a little bit of tow strapping and we made it as far as possible. We started hiking with Bill Tuck branching off to inspect Big Tamarisk Spring and the rest of us , Debbie, Steve, John and Andres, headed to Weavernoy. This system was built at the site of a small seep located by Dick Weaver and Floyd Vernoy, both of DFG and was subsequently named for them. There are two small check dams, the lower dam was filled with sand but apparently it was saturated as water was tricking over the 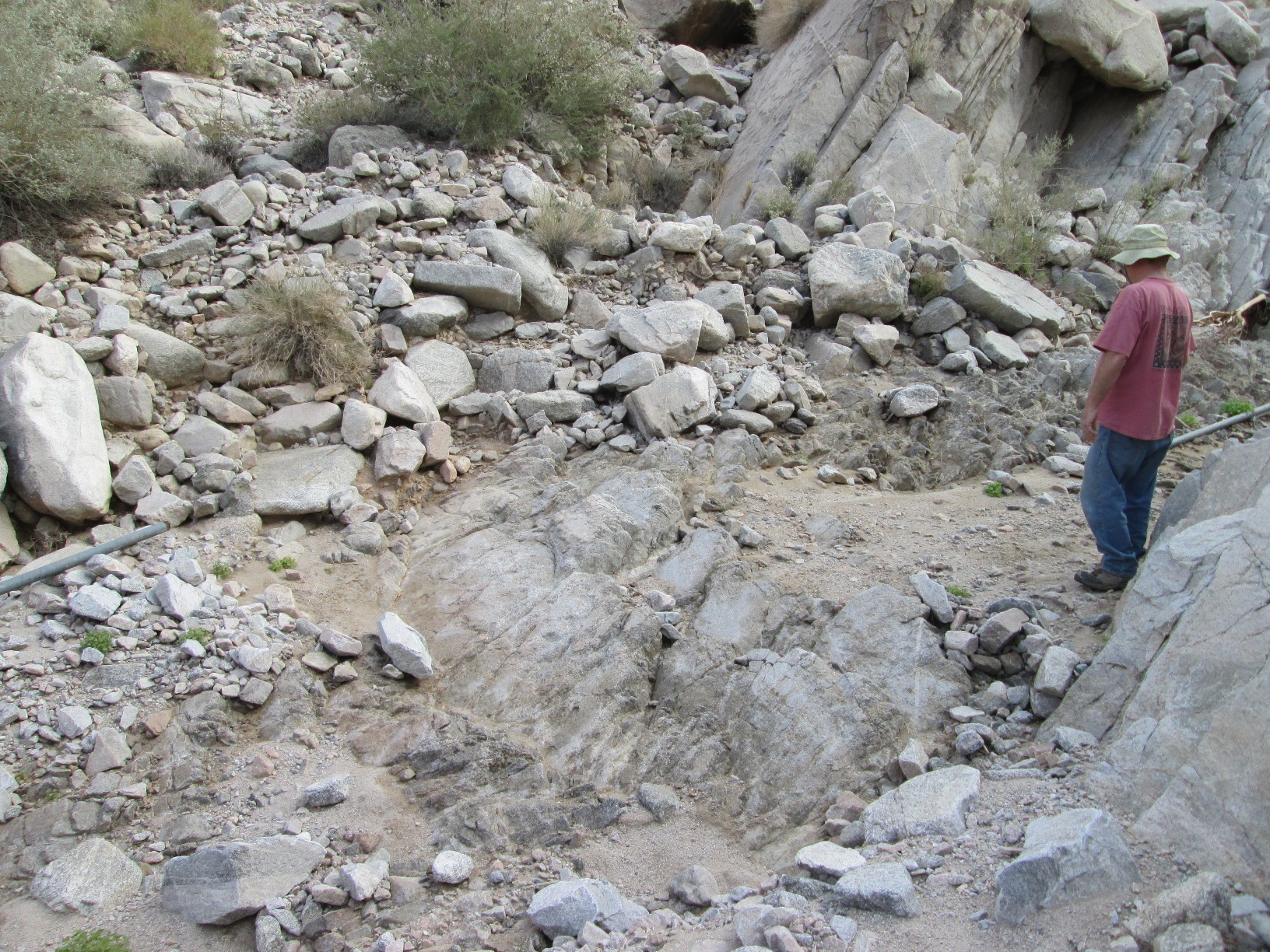 dam. The drinker is built right at the lower dam with the tanks directly above on a small ledge. The collection source is a slightly taller dam farther up the canyon. We found that a 20 foot section of the 2 inch galvanized collection pipe had been swept away by a flash flood. It was found about 50 feet downstream and partially filled with debris. Not much that we could do other than take photos and notes. This system will need some pipe threaded or large hose to repair. Either way more tools to carry. Luckily there are several pieces of 2 inch pipe laying around from when the tank manifold was replaced with hose so we won’t have to carry in any 2 inch galvanized pipe. Stay tuned for a project schedule. 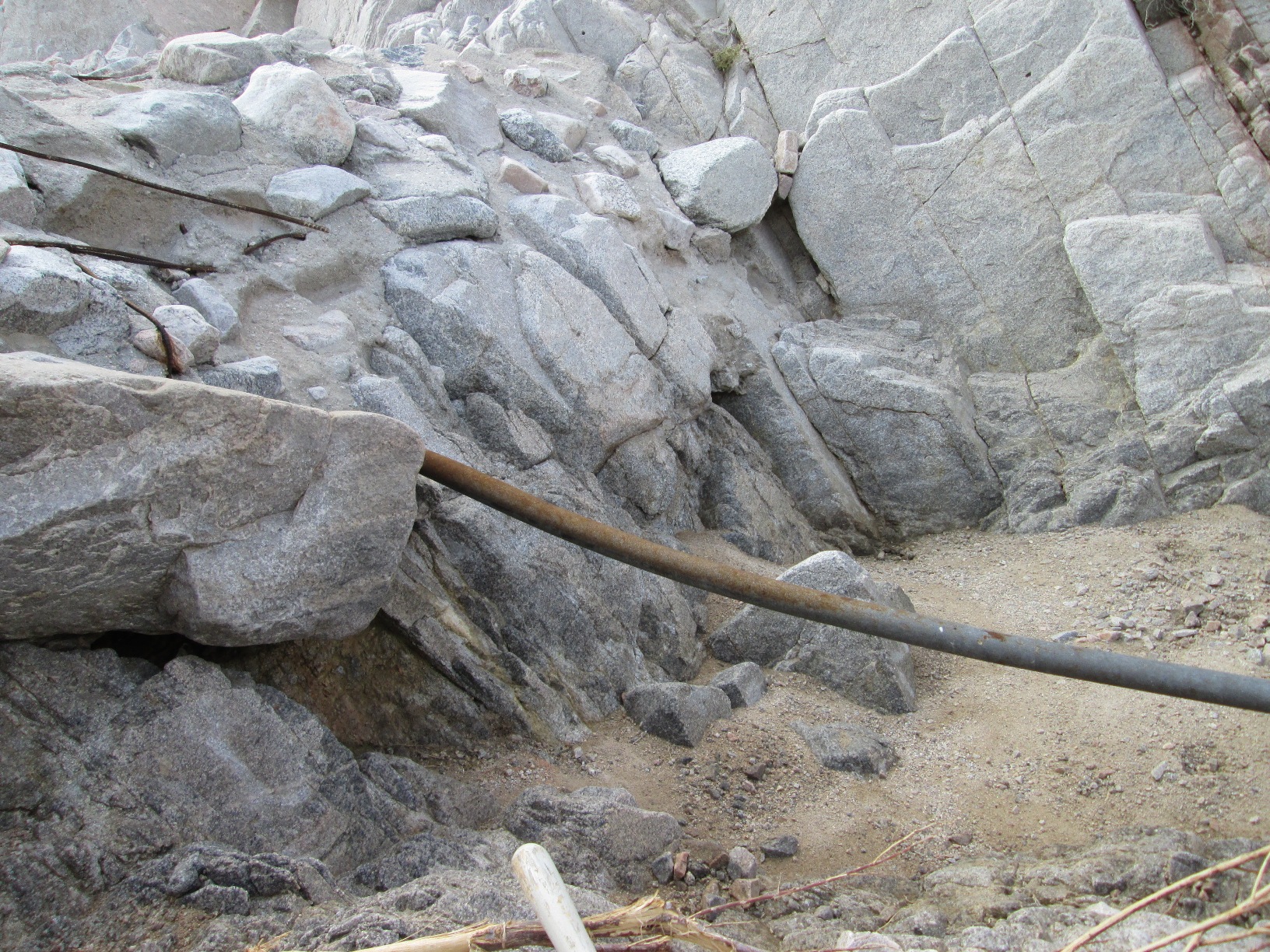 When it rains it pours! Debbie and I had the fun 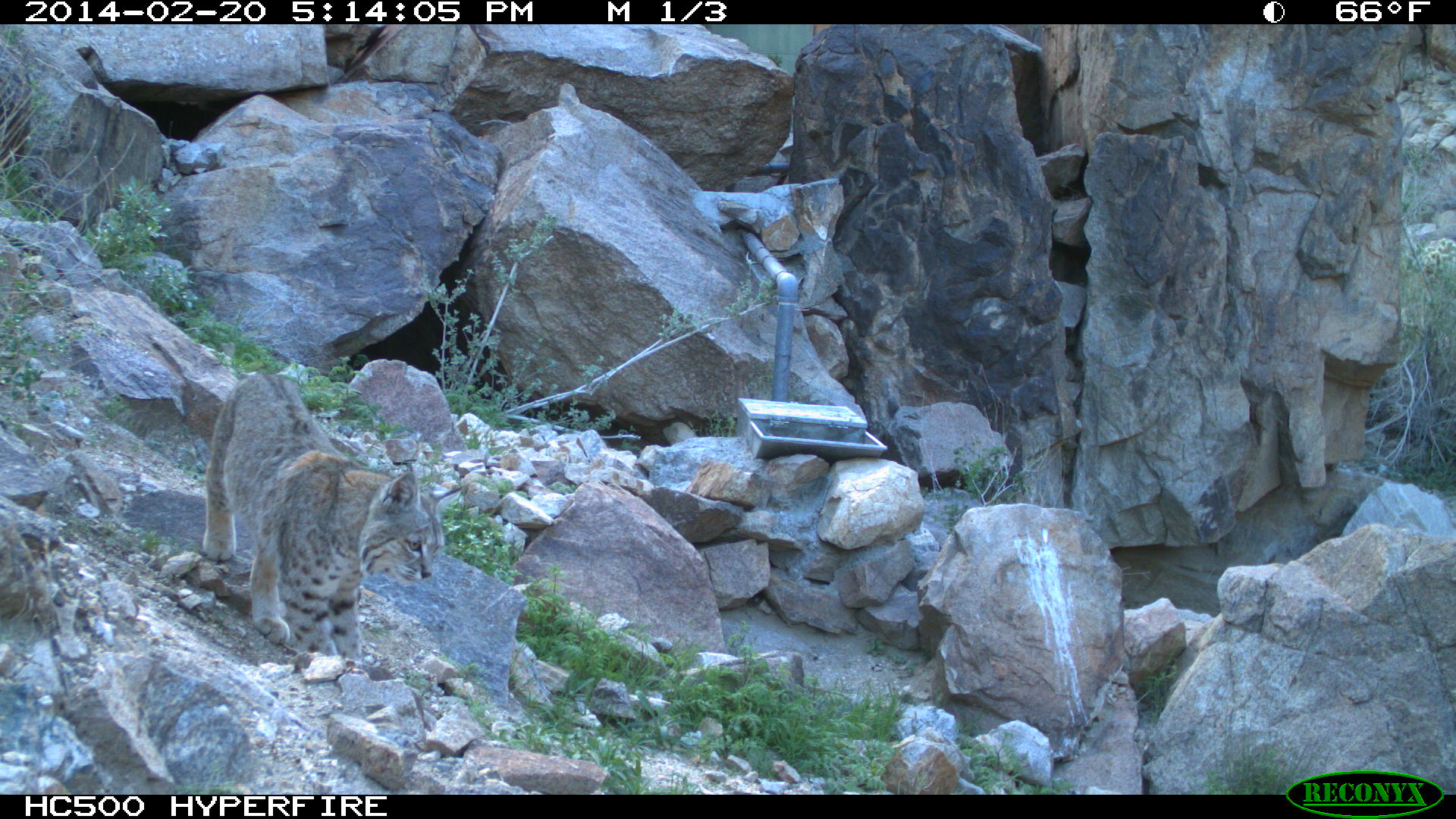 experience of visiting 5 water developments systems in the span of 4 days. First we performed our regular inspections of Bullion and Cleghorn on the 29 Palms Marine Corp Base. This was the easier leg of our trip. We were flown into each system courtesy of Mercy Air (yes the Medivac company!) They have a contract with the base and apparently have enough extra hours to perform some miscellaneous work for the natural resources, environmental and Archeology Group. Brent Husung NREA and the NREA supervisor, Lt Col Pochop accompanied us. Brent and I go back to 2002 and have hiked to the systems many times together. Since then, NREA has expanded and other employees normally 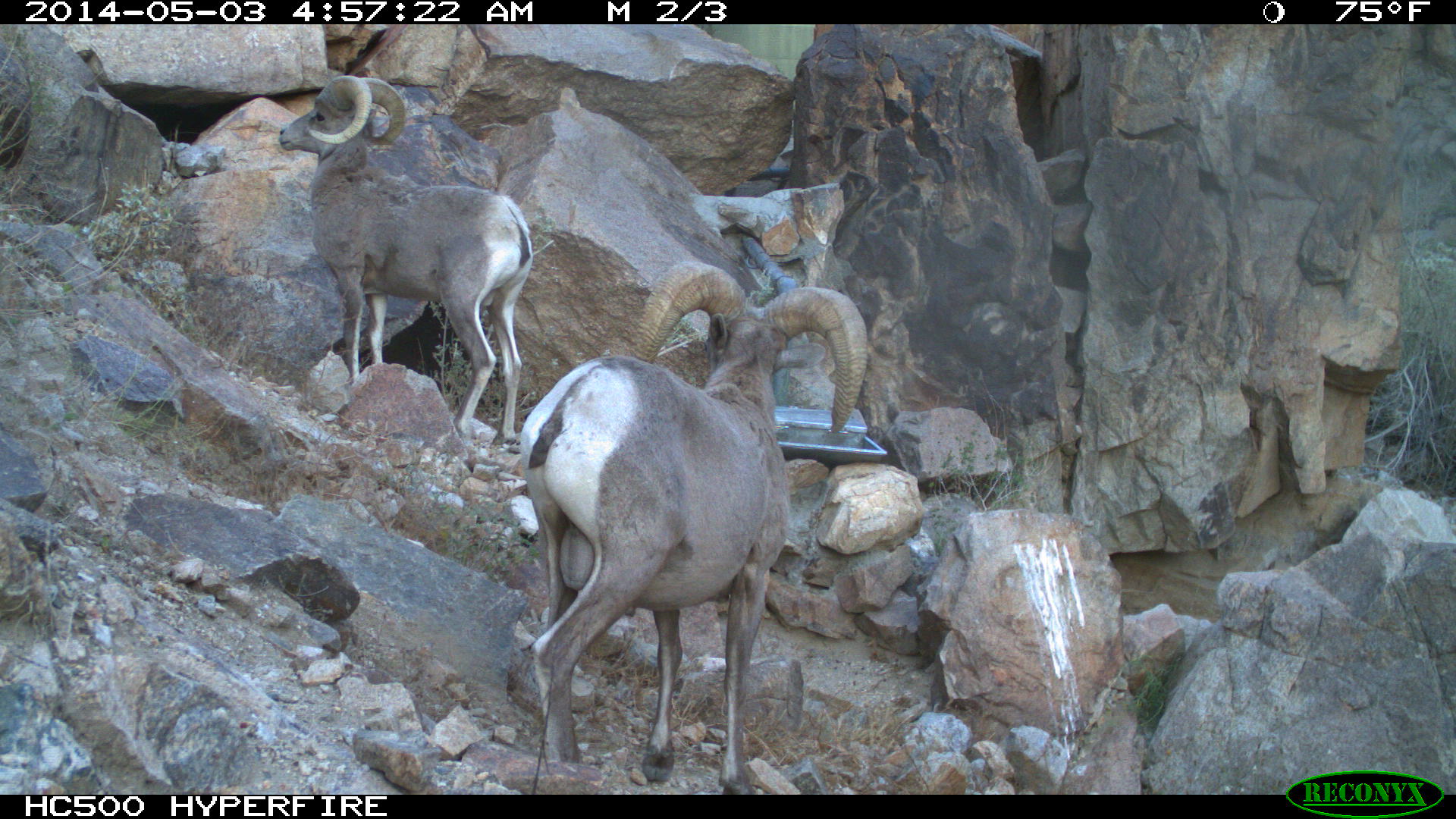 accompany us – that is just fine with Brent as a former Marine he had enough helicopter flights. Lt Col Pochop kept things lively – he is a former Cobra Pilot and had interesting observations about the medivac equipment.

The helicopter makes short and easy work of the inspections, what used to take us about 2 hours of hiking each way per system now takes about 4 hours total for both inspections. 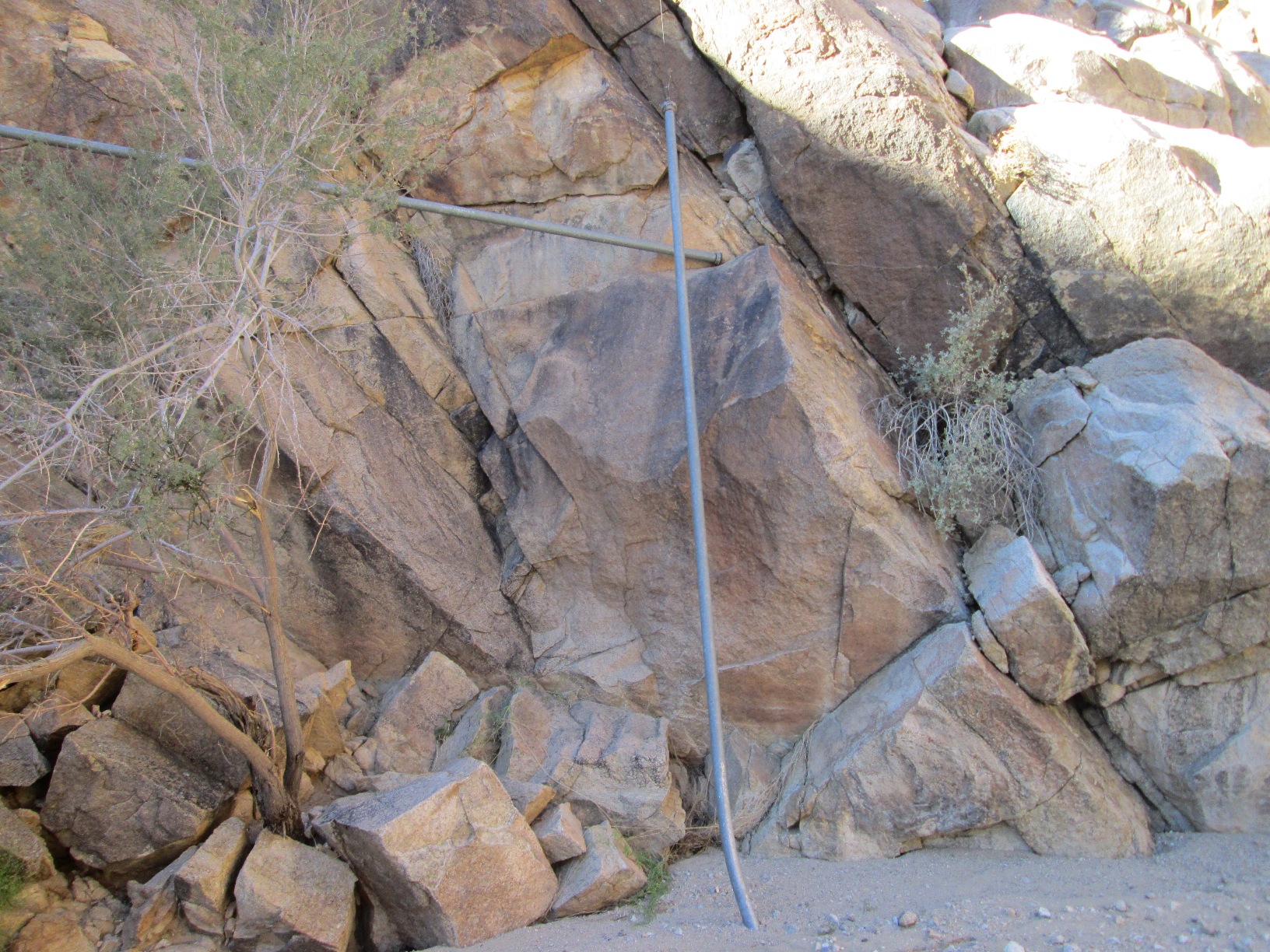 Unfortunately, the summer rain storms had not been kind to Bullion. The flashfloods had carried many rocks over the dam, enough to break the pipe fittings and free a 20 foot section of pipe. Then to top it off, about 5 feet of the pipe was buried in the sediment at the base of the dam. This section of pipe is located about 10 feet above the floor of the canyon so a repair is going to be challenging. There is about 1000 gallons in each tank and based on previous use that should be enough to last about 1 or 2 years. This system gets only low use. There is a camera so we know it gets used by bighorn, bobocats and other animals, just not heavily.

At Cleghorn, everything was in order and functional. Tanks were about ¾ full and held about 1800 gallons each, even without more rain this winter the supply should be adequate.

After we finished at 29 Palms Debbie and I headed to the Dr. Lutz repair project (see article). After that project was over, on Saturday we hiked to Weavernoy to perform the inspection with Bill Tuck, John Voght and Andre Reutman. John and Andres headed home, Bill elected to camp out with us and head home in the morning. 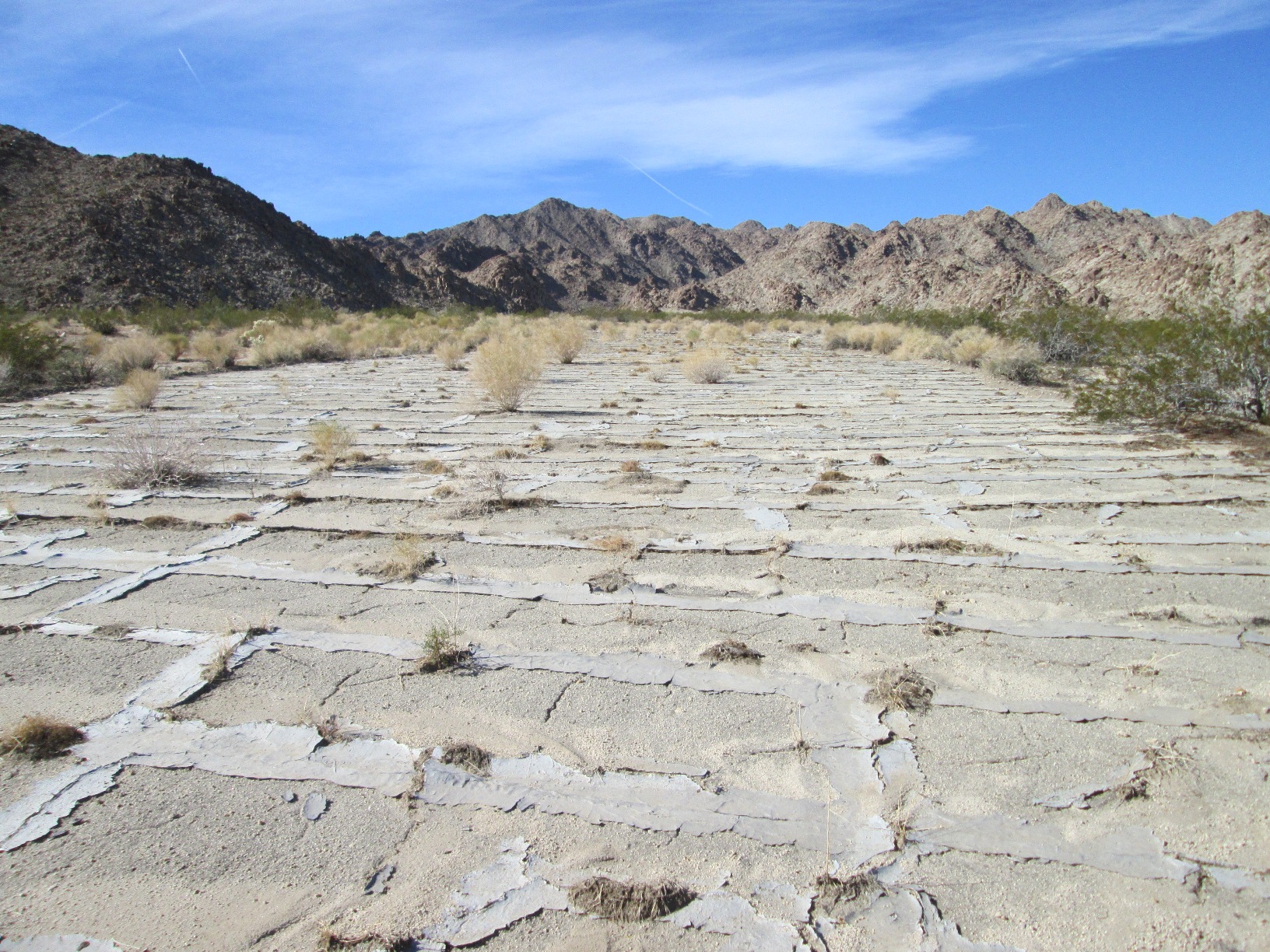 decided we had enough time to hit one more system – Coxcomb Mountain. We found the system just like the last I visited in 2005 – mediocre at best. This system is one of the earliest systems and it really shows in the poor design. The rainmat is a generous but decrepit slab of asphalt about 150 feet long – it’s a bit of a guess as the uphill end just sort of fades away into the sand. The asphalt is so thin that many bushed have sprouted up through cracks. Some of the cracks have been patched numerous times resulting in miniature ridges and dams that are ½ inch high in places. At the lower end of the rainmat there is a small ditch with a Johnson screen for collection. The tank in an underground cattle trough nearly the size of a small swimming pool and is covered with a wood frame and aluminum sheet metal. The drinker is a very steep concrete ramp that is gravity fed from the tank without need for any valves. It is located 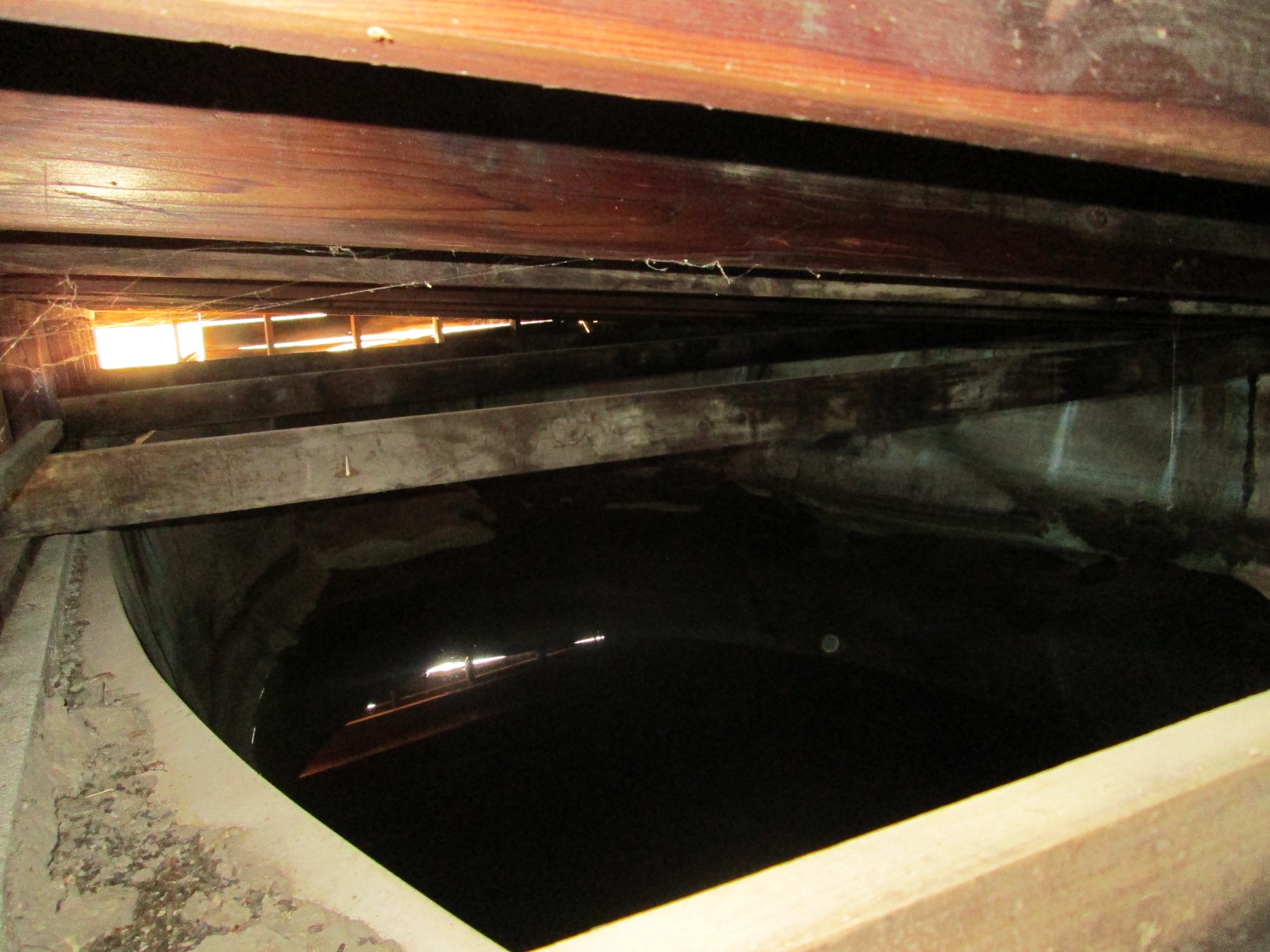 directly between the tank and the rainmat. If the rainmat overflows, water can run right into the drinker trough. Unfortunately the feed from the tank is a very small ¾ inch line that only allows water to seep through but it is apparently sufficient.

The roof serves as additional collection. I have never seen this system with more than about 18 inches of water so I suspect that the drop between the Johnson screen and the tank is too small to allow for quick fill once the tank is partly filled. We have seen little use at this system in the past but Debbie spotted bobcat tracks in the dried mud. Due to the summer rains, the Johnson screen trough was filled with sand and the drinker trough had about 18 inches of mud. Apparently, this system has not been dug out for several years. I 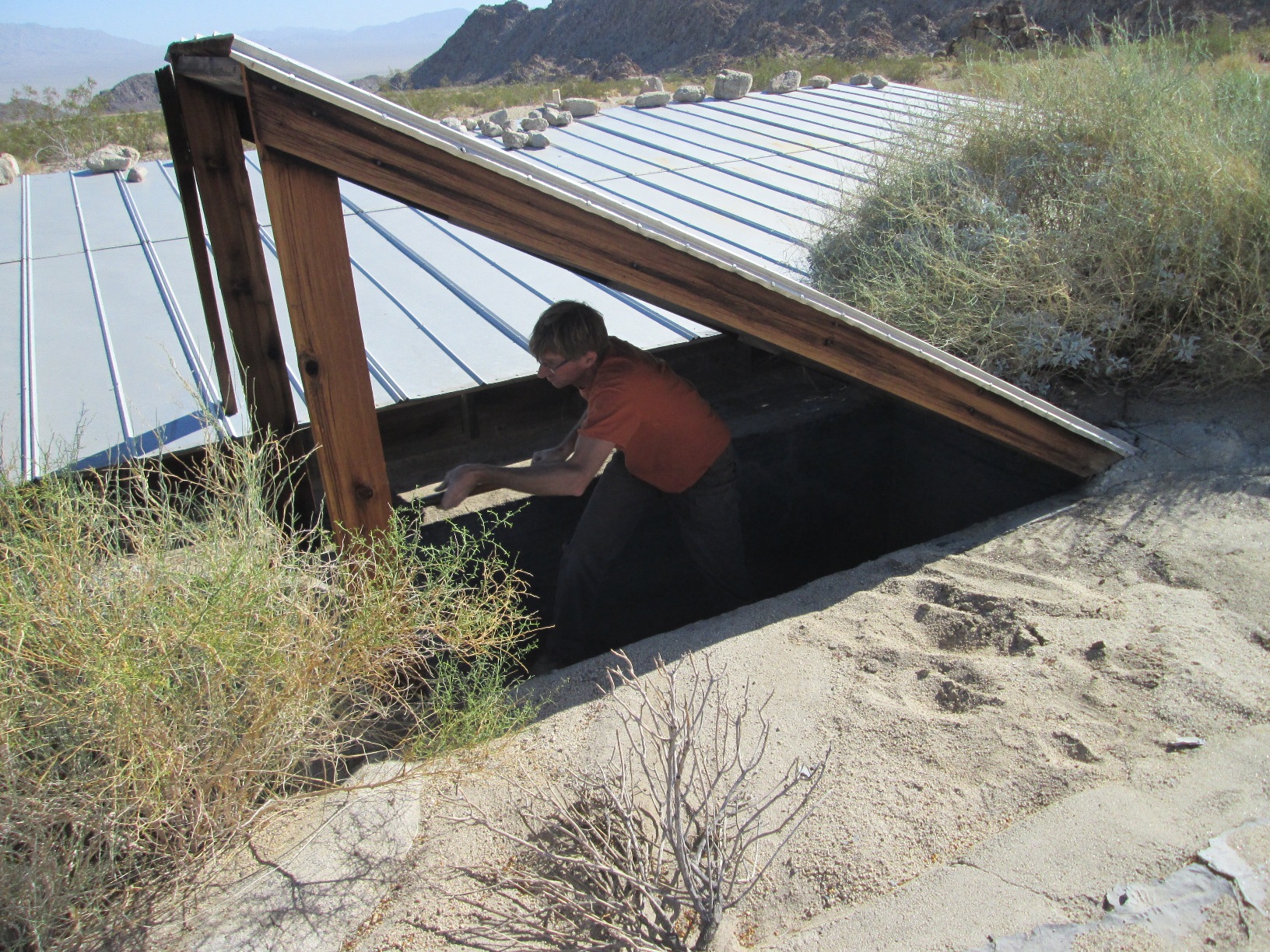 shoveled as much as I could until I tired out. The trough is too deep to dig from above yet barely large enough to fit into. A 5 gallon pail would definitely help. Debbie cleaned the Johnson screen and we called it a day.

Bullion, Cleghorn, Dr. Lutz, Weavernoy, Coxcomb Mtn – 5 systems, 4 days! I’ll probably never top that again. I would like to hear from any other members that have done a similar marathon. 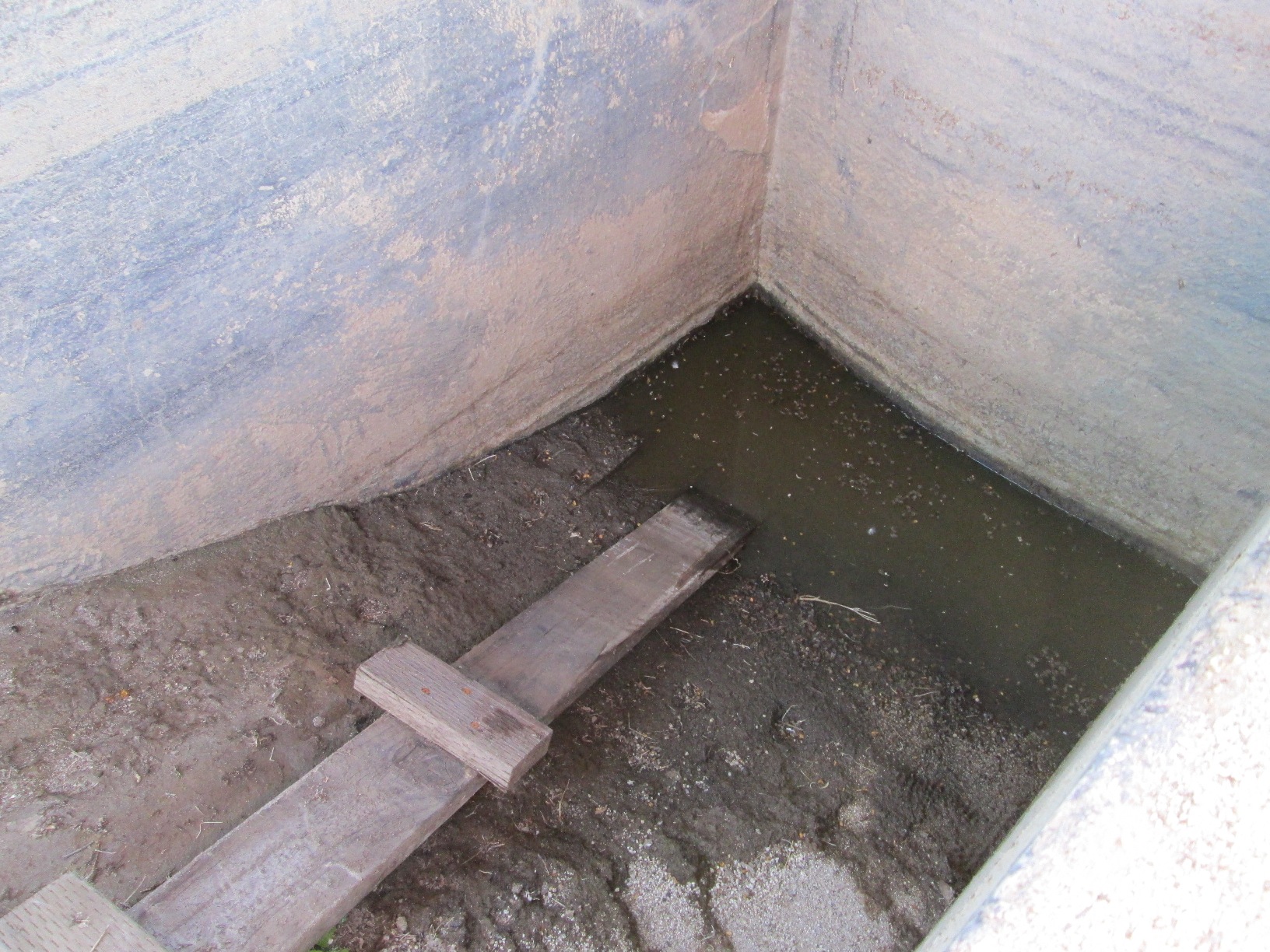 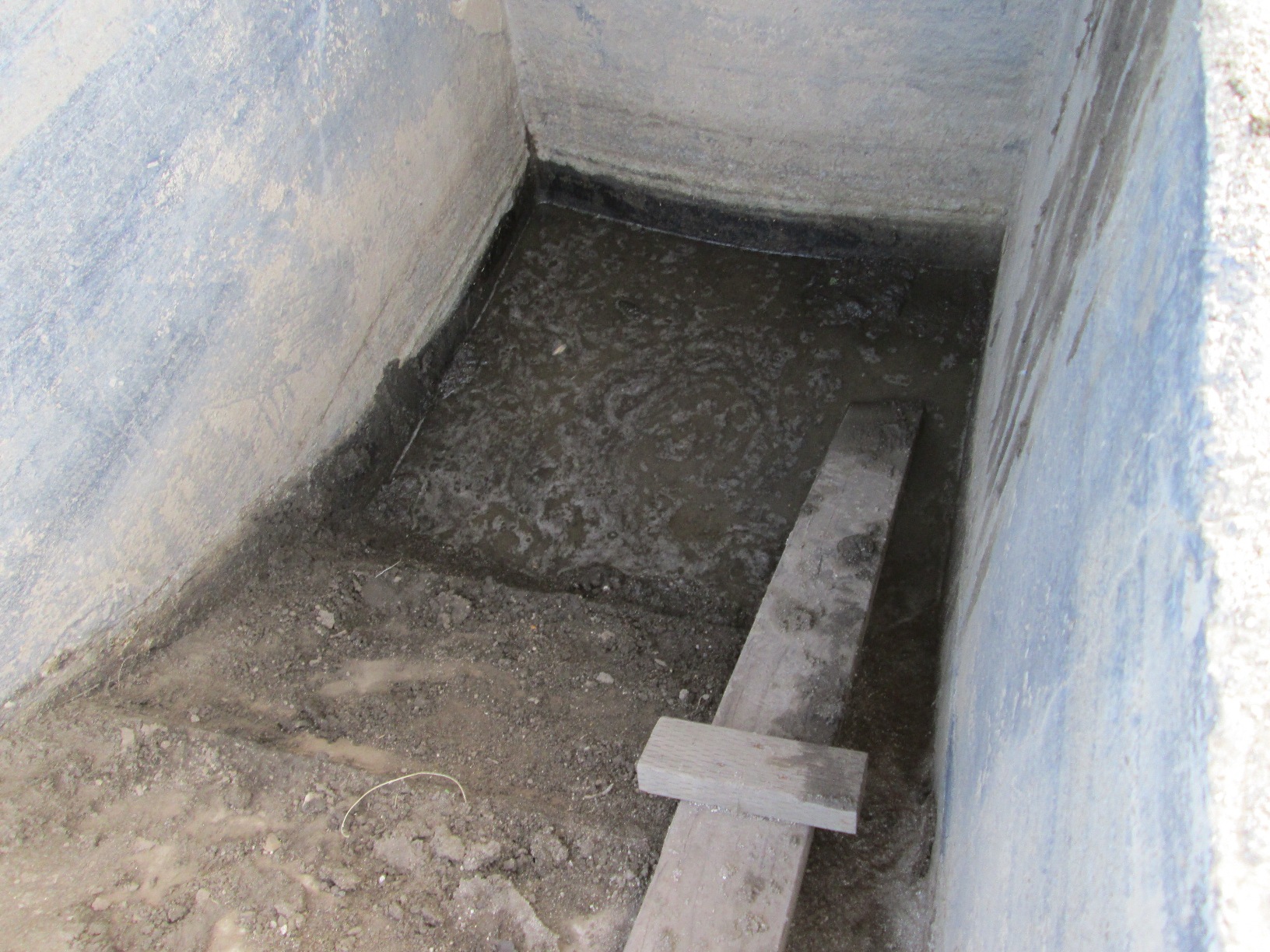 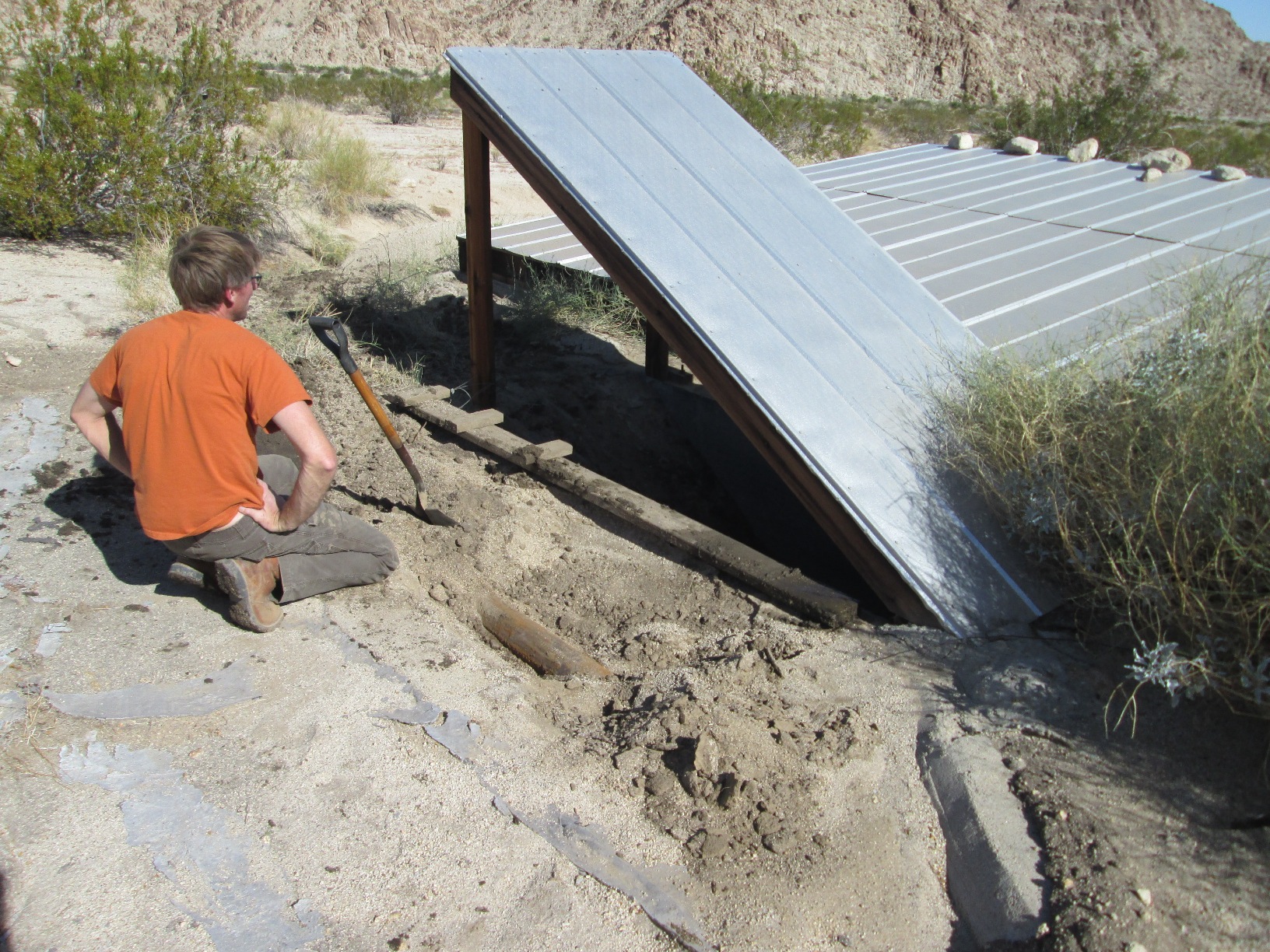 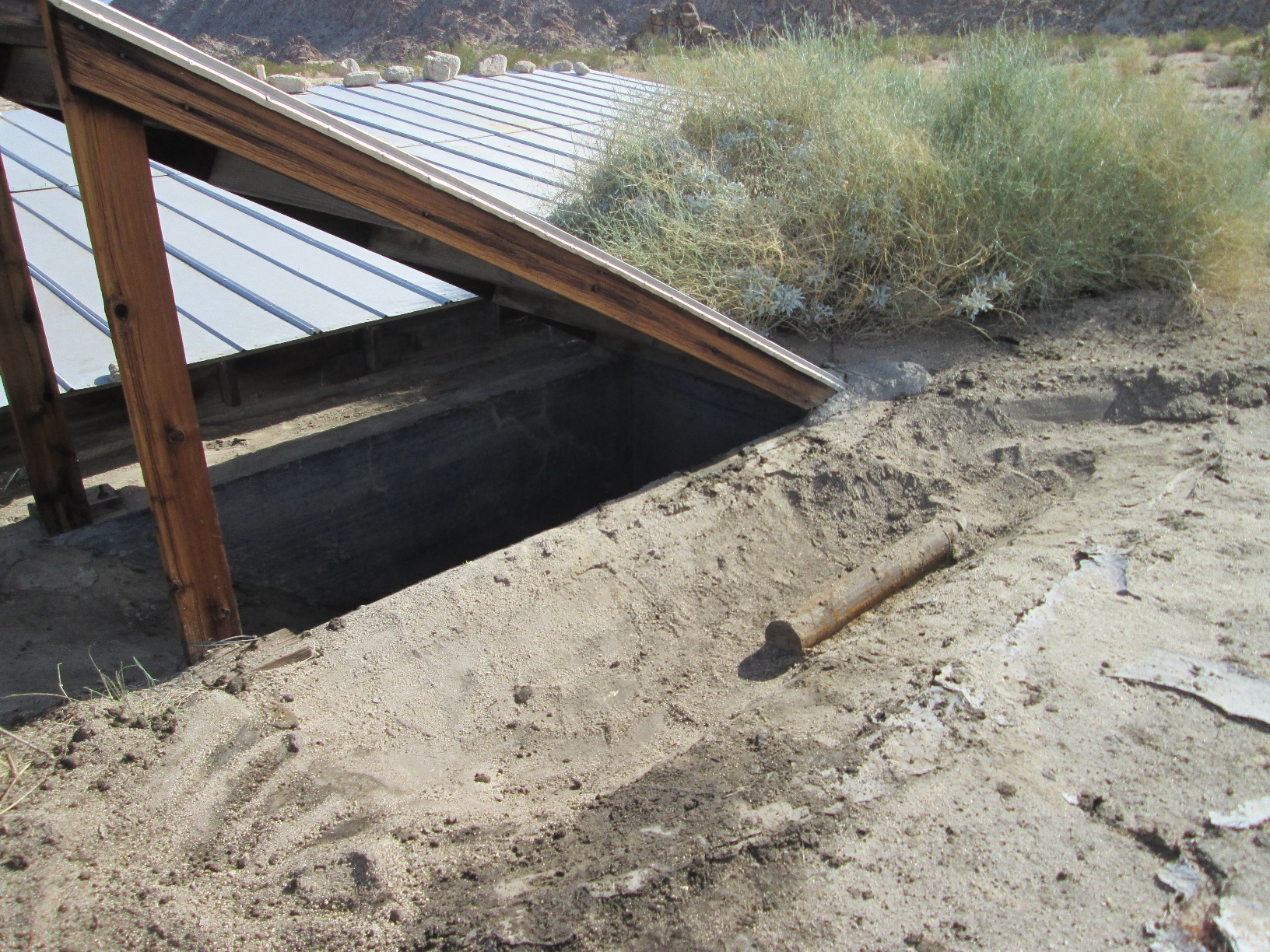